By Jordan Bond of RNZ.co.nz and is republished with permission.

A shop owner in a central Auckland suburb had a knife pulled on him and his wife in broad daylight yesterday by two teenage girls. 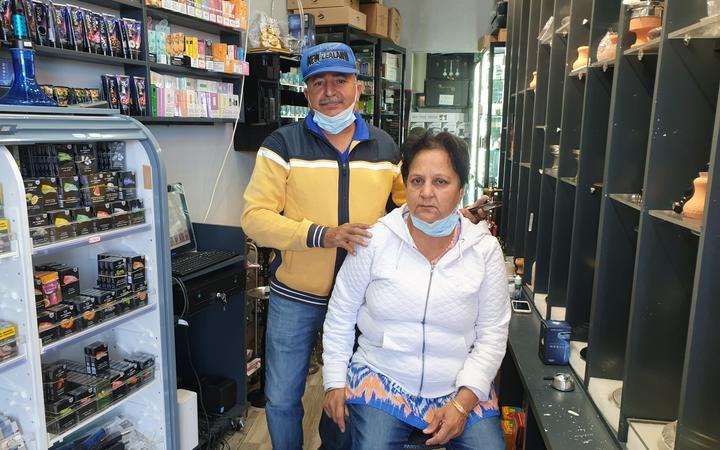 The assailants told him they would kill him over a hundred dollars worth of shisha products, which look similar to cigarette packets.

Within a 200 metre stretch of Sandringham Road, three different stores are boarded up, having been broken into or ram-raided in the last fortnight.

Stolen cars and weapons are being used to steal tobacco, vapes and alcohol. Police say the vast majority of ram raids are committed by teenagers.

“I was standing here and one of the girls pointed a knife onto me and said ‘get back or I’m going to stab you’,” Batra said.

“So I talked to the girl like she was my own daughter. I said ‘what the hell are you doing, you’re a school-going girl, why are you trying to ruin your life? For God’s sake, don’t do this,’ but she was not bothered.”

The other girl started putting shisha products, which look like packets of cigarettes, into her bag.

“My wife pushed her and stopped her from doing that. The other girl with the knife pointed it [at] my wife and said ‘I’ll hit you, I’ll kill you’.”

They had a scuffle, neighbouring shop owners arrived, and the girls got away. Subhash and his wife were not injured.

It was all caught in CCTV footage.

“It is scary, but I’m sorry to say, when we came to New Zealand we were told it was a crime-free country. We opened the store in October 2021, and so far five times [we’ve been robbed],” Batra said.

Police say in the 12 months to October last year there were 283 ram raids around the country, more than five a week.

Eighty-eight percent of those were by teenagers or even younger kids.

Just 42 percent of the offenders were found – the majority got away.

That was not a surprise to Kshitij Vatsa, whose dairy a couple of hundred metres away from Batra’s shop was ramraided a week ago by teenagers.

As well as the damage, a few thousand dollars worth of cigarettes were taken.

Vatsa no longer had his children hanging out in the back of the shop due to safety concerns.

“I’ve heard it’s only teenagers [doing the ramraids]. I think there were nine kids in my shop when it happened, I think two or three girls and six boys. What I know from the police is that it was an 11-year-old girl driving. It’s pretty sad, 11-year-olds or 12-year-olds doing robberies like this.”

Police managed to apprehend all nine occupants after being tracked by the police helicopter. Two of the offenders were to appear in Youth Court. The other seven offenders were referred to Youth Aid.

Back up the road, a boarded-up liquor shop was ram raided two weeks ago, store owner Anna said.

“We are worried. We work so hard, we pay taxes. But now I think that New Zealand is not secure anymore. Even if the police catch them, what [would] they do?”

Batra said the children and teenagers involved in the attacks did not have any fear of the police. In fact, they boasted about it online and essentially taunt police, he said.

He mentioned a robbery of his shop earlier this year.

“Young guys, they recorded the entire proceedings amazingly with their own phone. [They] made a video, went home, displayed the [stolen goods] and posted it on social media, on TikTok. Amazing! They are throwing a challenge to the police – ‘look, we have done it. You can’t do anything to us’.”

Sandringham is a vibrant, multi-cultural part of town. There are a lot of immigrants and second generation New Zealanders living in the suburb and there is a large Indian influence.

These shop owners say their feeling of security has dwindled recently, and they were questioning whether to shut up shop.