Two of Australia’s top intelligence chiefs have met Solomon Islands’ Prime Minister Manasseh Sogavare to raise Canberra’s concerns over the security agreement the Solomons is due to sign with China.

Sogavare’s office said the men discussed “Australia’s core security concerns” about the security agreement, which Australia fears could lay the legal groundwork for a Chinese military presence in Solomon Islands. 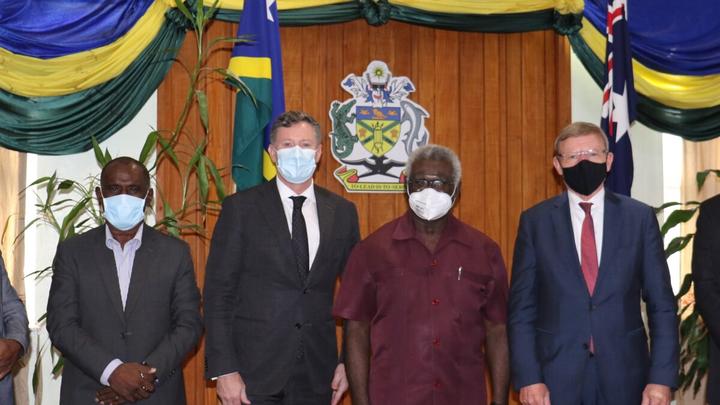 Officials also posted a picture of Sogavare standing with Paul Symon, who is the head of the overseas spy agency the Australian Secret Intelligence Service (ASIS), and the Director-General of the Office of National Intelligence Andrew Shearer.

A spokesman for Mr Morrison declined to comment on the visit.

The statement said the meeting provided a platform for the two countries to better understand each other, in particular on Solomon Islands’ decision to its broadened security partnership with China.

But there was no indication in the statement that Sogavare’s government is willing to soften its position or abandon the deeply contentious agreement.

The statement pointedly said that China remains an “important trading partner for both countries and makes it clear that the government is not prepared to abandon efforts to strike security pacts with more countries.

The ABC reports several Australian government ministers have publicly raised concerns about the pact since it was leaked online last month.

It has since been “initialled” by top officials from China and Solomon Islands, but not yet signed and formalised by their foreign ministers.

Last month, Morrison said the agreement showed the “constant pressure” being placed on Pacific states, and earlier this week a top US admiral labelled the security negotiations between Honiara and Beijing “very concerning.”

Sogavare lashed out at critics of the pact in parliament last week, insisting there was no prospect of a Chinese military base in Solomon Islands, and saying it was “insulting” to suggest his country couldn’t navigate its relationship with Beijing.

China’s government has also berated Australia for publicly criticising the deal, accusing it of paranoia and trying to undermine the sovereignty of Solomon Islands.

Some Pacific Island nations are uneasy about the agreement and the prospect of China striking its first bilateral security deal in the region, although few Pacific leaders have waded into the public furore.

The Prime Minister of Papua New Guinea James Marape told ABC earlier this week that other states in the region were “conscious” of events in Solomon Islands and wanted to discuss the matter at the Pacific Islands Forum leaders meeting this year.

Samoa’s Prime Minister Fiamē Naomi Mataʻafa also did not criticise the security pact but said Pacific Island countries had to hammer out a collective response to growing geopolitical competition in the region.