Explainer – There’s a new Covid-19 variant making headlines around the world – Deltacron. Whatever you may think about that name, it’s exactly what it sounds like – a combination of the Delta and Omicron variants.

So how did this happen, where did it come from and should we be worried? RNZ is here to clear it all up. 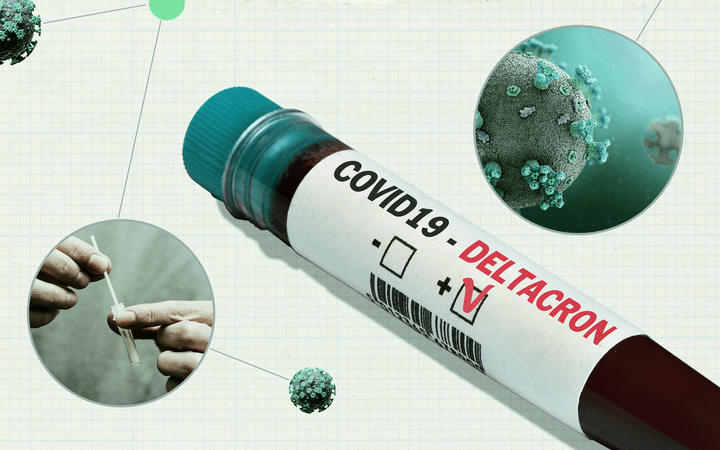 OK, what is this Deltacron?

That’s when two related viruses infect the same individual and the same cell during a co-infection, she says.

“That person is unlucky enough to be infected by two different variants of the same virus and the virus replication machinery kind of accidentally switches from one genome to the other, resulting in a mixed genome, so that’s called viral recombination. “

It’s worth noting that there are different versions of Deltacron – Geoghegan says it’s actually somewhat unhelpful to use the name Deltacron because of this.

Earlier in March, World Health Organisation Covid-19 technical lead and infectious disease epidemiologist Dr Maria Van Kerkhove said the WHO was aware of Deltacron but the levels of detection are low.

“The recombinant itself, this is something that is expected given the intense amount of circulation that we saw with both Omicron and Delta and given the sheer number of changes and mutation within Omicron, it was much easier for … people who are studying the genome to be able to detect these recombinants…

“Unfortunately, we do expect to see recombinants because this is what viruses do, they change over time.

When did this variant pop up?

Various reports have pointed to Gisaid, a virus information sharing initiative, as noting the “first solid evidence for a Delta-Omicron recombinant virus” showed the recombinant was identified in several regions of France and “has been circulating since early January 2022”.

“Genomes with a similar profile have been also identified in Denmark and The Netherlands. Further investigations are needed to determine if these recombinants derive from a single common ancestor or could result from multiple similar recombination events.”

Writing for The Conversation, Trinity College Dublin biochemistry Professor Luke O’Neill said “Deltacron’s story begins in mid-February, when scientists at the Institut Pasteur in Paris uploaded a genetic sequence of the coronavirus that looked very different from previous sequences. The virus sample had come from an elderly man in northern France and looked odd.

“Most of its genetic sequence was the same as Delta’s, which was dominant worldwide up until late last year, but the part of the sequence that encodes the virus’s spike protein – a key part of its external structure, which it uses to get inside cells in the body – came from Omicron.”

What are the chances of this happening?

“This coronavirus has been doing it all the way through this pandemic. However, it’s only recently become easier to spot since viruses that are circulating now are becoming more genetically distinct from one another.

“For example, we now have Delta, but we also have BA.1 and BA.2 which are variations of Omicron. And they’re all circulating, causing infections. So when recombinants occur between these lineages, it’s possible to identify, even if that switched part of the genome is quite small.

“Another reason why we’re seeing a lot of it now is because when BA.1 took off, at least [when] it spread across Europe really rapidly as well as the US, there was really high levels of Delta already there, and so there’s so many opportunities for these people to get co-infected and then recombine and transmit onwards.”https://players.brightcove.net/6093072280001/default_default/index.html?videoId=6301433365001

How worried should people be?

We said before there were different version of Deltacron – the one people might be more concerned about has been given the name XD, Geoghegan says.

“It’s basically a name for Delta and BA.1. It was first detected in France, and it contains a spike protein of BA.1 and the rest of the genome of Delta.

“It’s been now found in Germany, in the Netherlands and Denmark. And because it contains the structural proteins of Delta, if any of these different recombinants were to act much differently, it could be this one, but generally viral recombinants like these should be closely monitored for signs that they might be increasing in frequency, so we can kind of understand if these recombinants induce changes to the virus’ transmissibility or disease severity or in fact immunity.”

That said, it’s not clear if we need to be worried yet, she says.

The New York Times reports that the spike protein – which as noted earlier Deltacron has taken from Omicron – is the most important part of a virus when invading cells.

“It is also the main target of antibodies produced through infections and vaccines. So the defenses that people have acquired against Omicron – through infections, vaccines or both – should work just as well against the new recombinant,” the Times reports.

“Scientists suspect that Omicron’s distinctive spike is also partly responsible for its lower odds of causing severe disease. The variant uses it to successfully invade cells in the nose and the upper airway, but it doesn’t do so well deep in the lungs. The new recombinant may display the same penchant.”

Van Kerkhove also says in a WHO broadcast “we could have variants that emerge that have properties that are quite concerning, but if it doesn’t circulate, then it doesn’t become a public health threat”.

It’s worth noting that the recombinant is quite rare so far.

Writing for The Conversation, O’Neill said: “We can, though, be somewhat confident that prior infection with other variants, as well as vaccination, will offer protection from severe disease should Deltacron begin to dominate. We know that vaccines, which are based on the original Wuhan strain of the virus, also protect against severe disease with the more recent variants.

“Time will tell whether Delta and Omicron have produced a wild child for us to worry about.”

Is this Delta-Omicron mashup in New Zealand yet?

Geoghegan says it hasn’t been detected here yet and while it has been found in parts of the United Kingdom and Europe, it’s relatively rare.

“However, we need to closely monitor these and we need to continue our genomic surveillance to then be able to identify this if it occurs in New Zealand.”

Genomic surveillance will help us identify if it is worth concern – and find any other variants that crop up, she says.

“I think for the foreseeable future, we can expect new variants, if not recombinants, to emerge. And that’s basically evolution. It’s happening in real time in front of our eyes, which is daunting but quite fascinating.”