A man whose personal bank account was used to receive donations for the Parliament protest is bankrupt and has been declared insolvent three times. 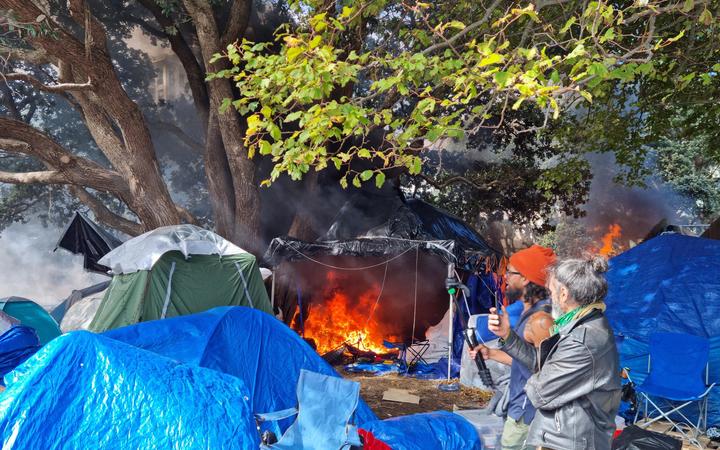 The protest lasted for 23 days before ending in a riot on 2 March. Photo: RNZ 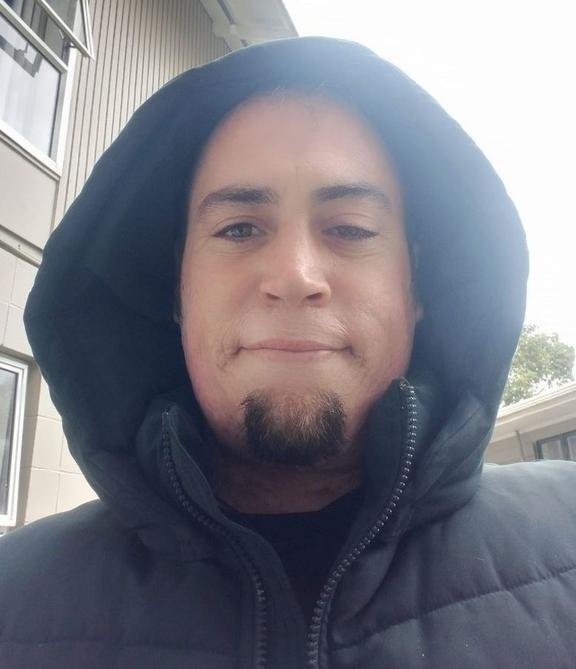 He often livestreamed events from the protest in Wellington, but also posted similarly conspiratorial content for months before the occupation.

However, the 35-year-old, who is also known as Jamie Murray, has a history of unpaid debt.

Mansfield was first declared bankrupt after applying for the process himself in the Rotorua District Court in December 2008, at which time he listed his occupation as unemployed.

Mansfield was automatically discharged as bankrupt in December 2011 but again applied for bankruptcy in July 2012, this time listing his occupation as a student.

He was again automatically discharged three years later and remained solvent for five years until again applying to be declared bankrupt in June 2020.

He also had a tenancy terminated in early 2020 after failing to pay rent.

The Tenancy Tribunal awarded the landlord $2770 – $1650 of which was recovered via a bond, but the balance remains outstanding.

Despite Mansfield’s background his bank account was used to receive donations for Convoy NZ 2022, the group which instigated what became the protest and later occupation at Parliament grounds through February and early March. 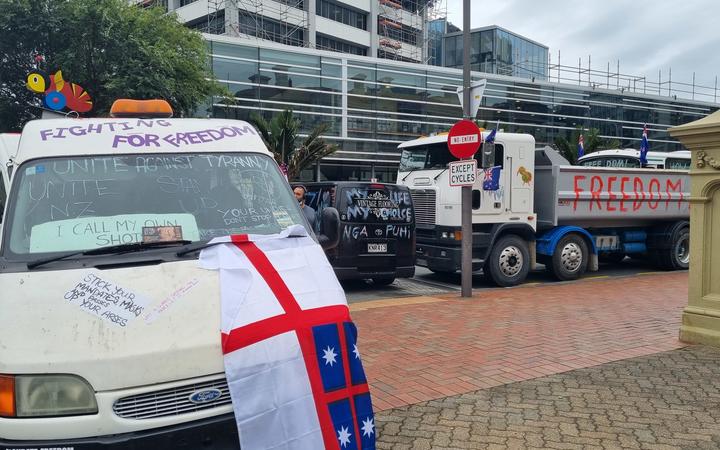 It was by no means the biggest group seeking donations in New Zealand’s antivax and anti-mandate circles, however, RNZ has seen evidence that thousands of dollars of donations to the group came flooding into Mansfield’s bank account by early February.

How much was ultimately deposited into Mansfield’s bank account, where that money ended up and how it was spent remains unclear.

Mansfield and the organisers of the convoy group fell out, and just a few days into the occupation were not communicating.

RNZ attempted to contact Mansfield to get his side of the story.

When we first approached him via social media he responded there was “absolutely nothing to discuss”.

When pushed about the money raised and how it was spent, he responded: “There were so many people/groups collecting the pūtea [funds] and there also is a difference between koha and donation and as far as the groups I’m part of have [sic] concerned [sic] they have been signed off and accounted for and it’s been tripled check so as far as I’m concerned there is nothing further to talk about nor will the team be happy me speaking to a reported [sic] but I unfortunately do not trust any reporters either as story’s [sic] love to be twisted.”

When asked what he meant by the groups he was part of having things signed off, accounted for and triple checked, he responded: “No further questions thank u”.

He followed up with: “When u are ready I would love to see the so called information u have got”, “Then we will correct what is needed because I can guarantee you you do not have truthful information” and “I can probably stomp on what Information-hearsay you have”, before subsequently blocking this reporter from contacting him on Facebook.

Rumours have swirled on social media about the whereabouts of the money raised since the early days of the occupation.

Mansfield took to Facebook on 8 March to address the rumours: “Just to clarify and get that story straight, obviously the Convoy and occupation of parliament I did help fund out of my personal money. For anyone who knows me personally, can back me up there.

“So I did help sponsor and donate to convoy. I did not steal any money. I did not help myself to any money,” he claimed in the livestream.

RNZ spoke to people who had known Mansfield personally and they say he has a long history of leaving people out of pocket.

One such person was the landlord who took Mansfield to the Tenancy Tribunal and ultimately had him evicted for unpaid rent and bills, and damage to the property.

He told RNZ he had still not seen the balance of the money he was owed by Mansfield.

“Jamie … was an exceptionally bad tenant who continually made promises he didn’t keep … I hope to never see him again,” the landlord, who RNZ agreed not to name, said.

Problems with the tenancy became clear almost as soon as Mansfield moved in as he was late with his rent for five of the first six weeks he lived in the rental and arrears grew from there, the landlord said.

“I knew he was a bad egg from the start and I was like ‘What the hell have I done letting this guy move into my house’ and then it was just a matter of following due process to get him out.

“He left the place in an absolute state. There was broken furniture and broken beds. I’ve got photos of a mountain full of rubbish that I had to drag out of the house, then get a company . . . come to pick it up to the tune of $300.

“He made no attempt to clean up after himself and just doesn’t give much regard to other people.”

RNZ again tried contacting Mansfield through his back-up accounts on social media to clarify how he came to be the one receiving donations, what aspects of his history he disclosed to the Convoy group and to find out how much money was received and how it was used.

He did not respond to those messages.

The financing of the parliament protest and occupation remains murky.

Weeks ago RNZ asked Voices For Freedom and The Freedoms and Rights Coalition for information on their finances – they did not respond.

One group that did give a glimpse into the huge sums of money involved was Profest.

Profest NZ Limited was incorporated on 21 February this year with Paul Currie as its sole director and shareholder.

Currie, a Whangārei resident with business and property interests around New Zealand, said Profest was created to try to tie together the disparate and sometimes differing voices and movements at the protest.

He said he set it up because it was necessary to give the occupation “a little bit more of a format”.

Profest did not start collecting donations until over a week after the occupation began.

“Profest was late in the piece, involved more for directing some of the donations that were contributed but was by no means the most significant – financially – donation collector,” Currie told RNZ. 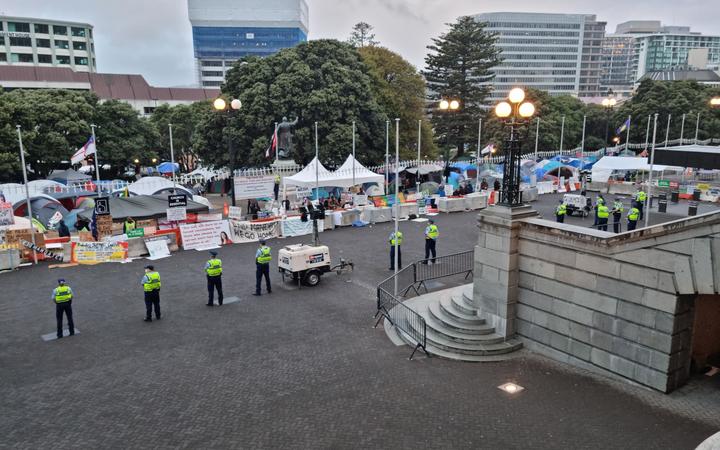 Profest says it did not start collecting donations until more than a week after the occupation began. Photo: RNZ

Unlike Voices For Freedom, The Freedoms and Rights Coalition or Jamie Mansfield, Currie spoke to RNZ freely and over a 38-minute conversation offered details about how donations to Profest were spent.

He could not offer a definitive sum on how much money was raised between on-the-ground cash donations, online donations and BitCoin, however, he said the group was committed to providing a financial summary to all who donated and that would occur in “due course”.

Only a “nominal” sum of what was donated remained and accounts were still being settled, Currie said.

Some of the larger infrastructure costs and ongoing food costs of the protest had fallen on Profest to pay, Currie said. 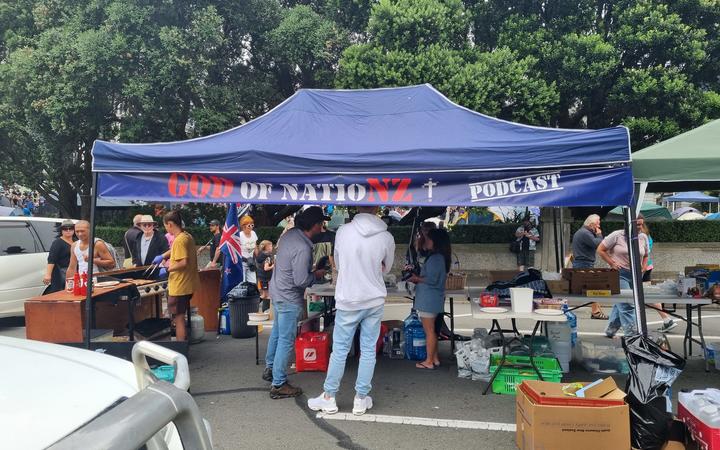 A sausage sizzle and coffee and tea facilities set up during the protest. Profest says its fundraising is paying for some of the food costs of the occupation. Photo: RNZ

He had not taken any director’s fees or remuneration related to Profest NZ Ltd.

“I’m not in it for any personal financial gain,” Currie said.

When the protest ended Profest stopped calling for donations and closed the donation function on its website, unlike Voices For Freedom and The Freedoms and Rights Coalition which were still collecting donations.

RNZ understands a complaint was made to police regarding the whereabouts of money given to Mansfield.

“While investigations are ongoing we are not in a position to provide any comment relating to particular individuals/ groups,” police said in a statement to RNZ.