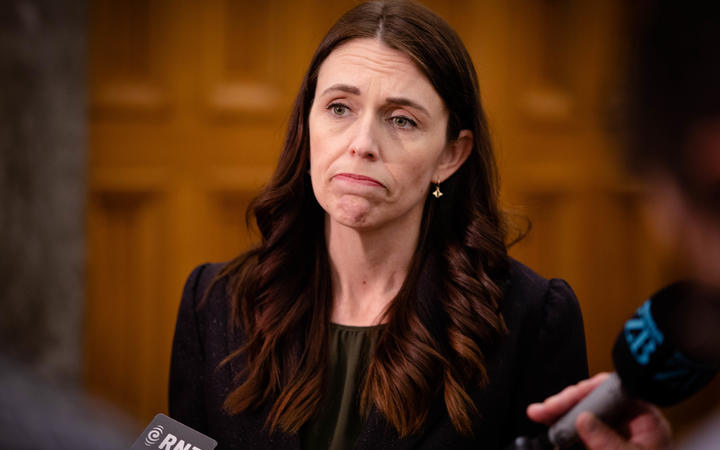 Despite being trespassed from Parliament grounds some days ago, protesters remain on the lawn and show no sign of leaving. There were about 3000 present over the weekend.

Ardern told Morning Report today “I think we all want them to leave”.

“What’s become very clear is this is not any form of protest I’ve seen before and we’ve seen a lot, you know, and I think we’ve said time and time again, New Zealand is a place where protest is part of who we are.

“Some of our greatest movements have been born of people movements, many of which have entered the forecourt of Parliament.

“But what I’m seeing, it is some kind of imported form of protest.

“We’ve seen Trump flags, Canadian flags, people who are moving around the outskirts of the area with masks are being abused.

“Children and young people on their way to school are being abused. Businesses are seeing people occupy their spaces.

She did not believe the protest should continue and had specific concern for the children there, saying it was not an appropriate place for them.

“Do I believe that they should be there? No. Should they go home? Yes. Especially, especially the children.

Asked if it was time for a “olive branch” gesture or for politicians to meet and talk with protesters, Ardern said their actions did “not create a space where there’s any sense that they want dialogue”.

“What I have seen down on that forecourt does not suggest to me that this is a group that are interested in engaging in policy development.

“There are signs down there calling for the death of politicians.”

As for the management of the situation, that was for police, she said.

Police today are appealing to protesters to work with them to try to clear the streets of Wellington.

Wellington district commander Superintendent Corrie Parnell said they did not plan to wait the protesters out.

Police “ultimately need to be able to make all of those operational decisions,” Ardern said.

“It is absolutely for the police to determine how they manage any form of occupation or protests. And you can understand why that is a convention we will hold strongly to.

“I would hate to see in the future a situation where you have politicians seen to be instructing the police on how to manage any type of protest – and that extends to not passing judgement on operational decisions that are for them.”

Asked about tactics used by Parliament’s Speaker Trevor Mallard over the weekend – out-of-tune music and Covid-19 vaccination ads being played to protesters – Ardern said “I would also enforce the difference in our different roles here, the Speaker exists on behalf of all parliamentarians.

“His job is to, of course, maintain a safe place to work. Right now it is a very difficult place for people to enter and the one piece of context I’ll just give is that it has not been a silent protest.

“What I’ve heard are clear anti-vaccination messages that do not align with the vast majority of New Zealanders.

“Media, when they’ve stepped onto the forecourt, have been abused and chased and called liars.

“So some of the rhetoric and noise coming from the protest has been pretty poor.”

A discussion on Mallard’s tactics was “not a fray” Ardern wanted get into, she said.

As for Covid-19 restrictions, Ardern said “we’ve only used what’s been necessary. That’s why we’re not using lockdowns anymore – because we now have other tools that means we don’t need to use those harsher form of measures, and we will continue to move away from them.

“But when we’re in the middle of a growing pandemic, that is not the time to move away from those things that keep us safe…

“When it comes to everything from the use of vaccine passes to the use of mandates, you’ve seen with other countries that they have been in the position to start lessening the use of those as they progress through the pandemic and got to a place where you see more stabilisation and a steady management within the health system.

“That is what we would move to as well. It is fairly difficult to put timelines or criteria on that when of course we are dealing with different variants that can come anytime. [I am] always loath to set up a situation you then can’t follow through on because of a changing situation, so instead I give the principle: As soon as we can move away, we will move away.

“We’ve done that with lockdowns. We’re opening the borders, we are easing restrictions that have been quite impactful for everyday lives.

“But right now, the ones we still have are going to help us get through Omicron.”