Kaniva Tonga | Largest NZ-based Tongan news service
Home Around New Zealand & the World Loto‘i Tonga, the heart of a Tongan, coming together in unity and... 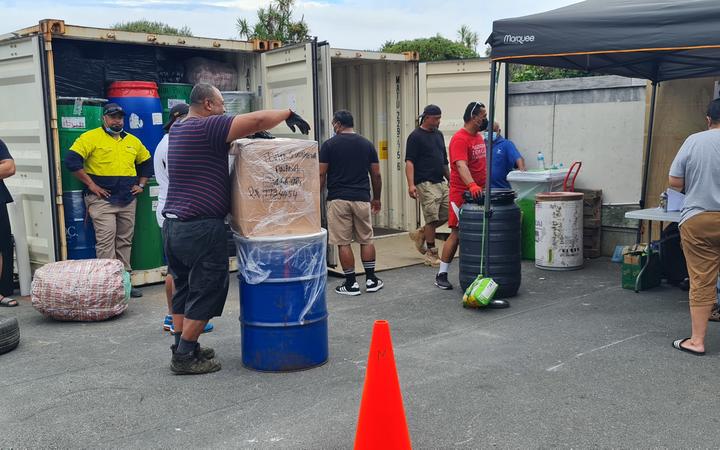 Tongan families in Porirua, the Hutt Valley and Wellington city have been packing barrels with water, tinned food, flour and other supplies to send to their families in the islands, following the massive volcanic eruption and tsunami in mid-January. Photo: RNZ Pacific

Tongan families in Porirua, the Hutt Valley and Wellington city have been packing barrels with water, tinned food, flour and other supplies to send to their families in the islands, following the massive volcanic eruption and tsunami in mid-January. The Wellington Tonga Leaders’ Council sourced two 40ft containers to carry these much needed essentials back to the Kingdom of Tonga.

The General Manager of the Council, Tae Moala-Mafi Tu’inukuafe, said the support towards the Tongan community has been overwhelming.

“We have been supported by the Porirua City Council, Taeaomanino Trust, Whanau Manaaki Kindergarten, and Victoria University, which has been amazing, led by Luamanuvao Dame Winnie Laban.” 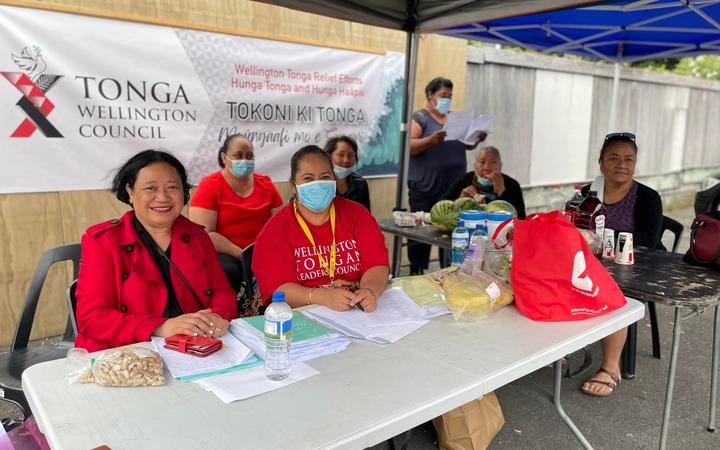 This support has enabled the Council to allow Tongan families to ship their supply barrels for free, on the 2 containers.

Ms Tu’inukuafe had a mesage of hope for Tongan families back in the Kingdom:

“Even though we do not have much to give you and the disasters and the terrible experience you went through, this is a small token of love and we are hoping this will give you a little bit of hope. I know you are really resilient and we love you, we are praying for you. There is never a day that goes by that we do not think of you and praying for you. 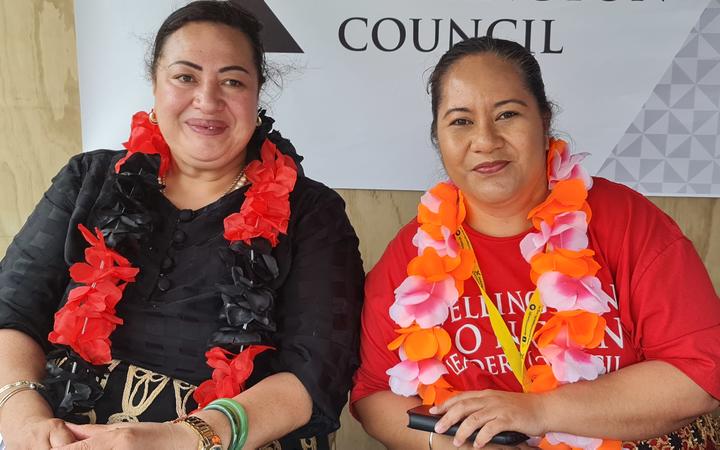 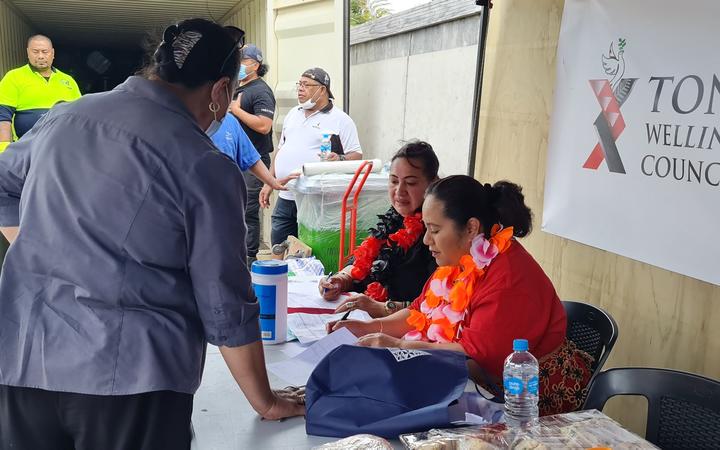 As the list was checked so too were vaccine passes, to ensure everyone’s safety from Covid-19, when dropping off and loading. Photo: RNZ Pacific

Edna ‘Ungatea Havea, Secretary of the Wellington Tonga Leaders’ Council, explained that families would be able to arrive with their barrels from Tuesday at 5pm. When her team arrived – some families were already there and had been waiting since 3pm

The Council allocated different days for the Tongan community in the Wellington region, to drop off their supply barrels.

Tuesday and Wednesday were given to Porirua families while Thursday and Friday were for the families in the Hutt Valley and Saturday for Wellington. 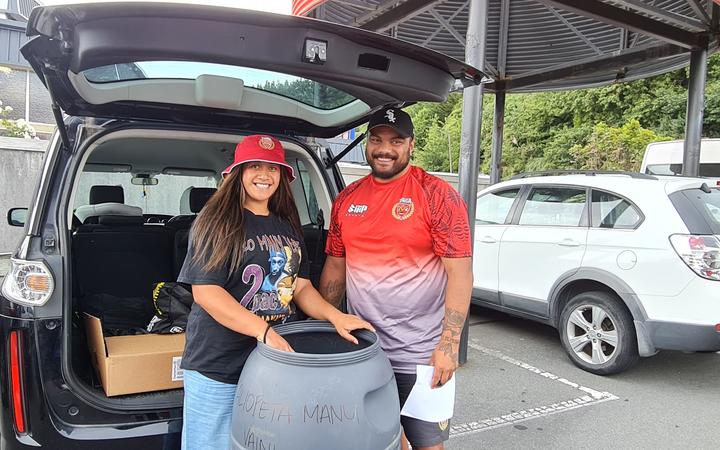 This family is packing good for Vaini Photo: RNZ Pacific 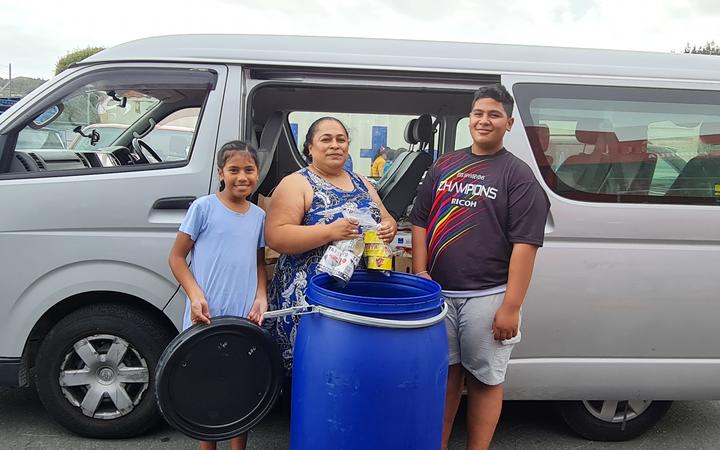 This family is packing needed supplies for family on Tongatapu Photo: RNZ Pacific

Ms Havea said she also had families in Whanganui and Levin asking if they could send supplies home in these containers. She said that they cannot turn away anyone wanting to send supplies, because Tongans are all part of one big family. Havea also said that one container is already full and the other is half-full.

“We knew that it was going to be this many coming in – so we have sourced another two 40 feet containers to come from Auckland next week. 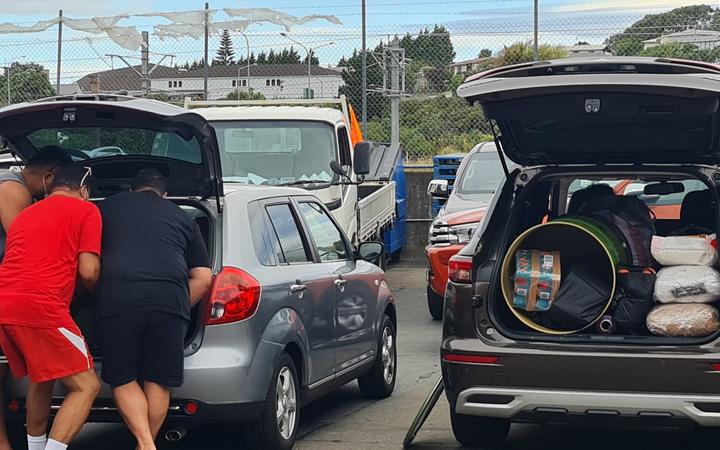 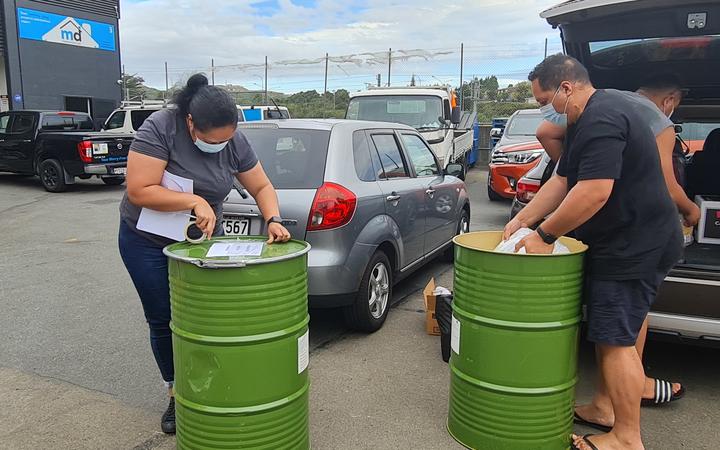 This family is packing their drums for family in Kolomotu’a Photo: RNZ Pacific

Loading the containers has been hard work as the supply barrels, many full of tinned food, are very heavy. Fortunately, many local Tongan men in the area have turned up, often after finishing work, to complete the task.

Ms Havea spoke about the Community spirit that has been shown by both Tongans and other New Zealanders. She said the response to the relief effort for Tonga has been overwhelming, not only from her Tongan community but by the wider Wellington region, Pacific, non-Pacific, organisations people have been generous and have offered time, money or donations to send to Tonga. 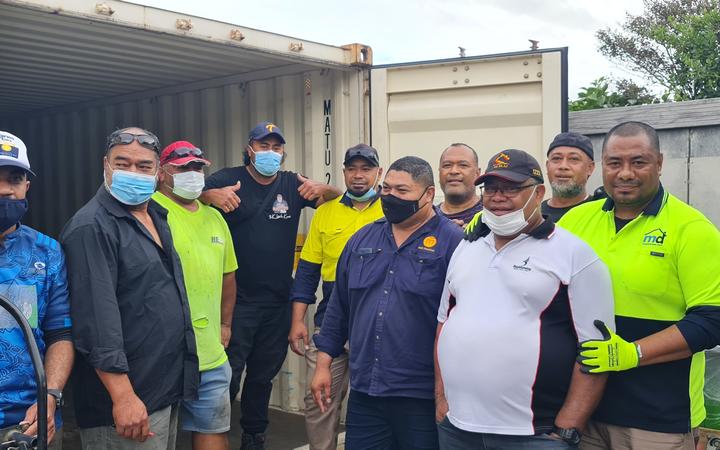 Loading the containers has been hard work as the supply barrels, many full of tinned food, are very heavy. Fortunately, many local Tongan men in the area have turned up, often after finishing work, to complete the task. Photo: RNZ Pacific 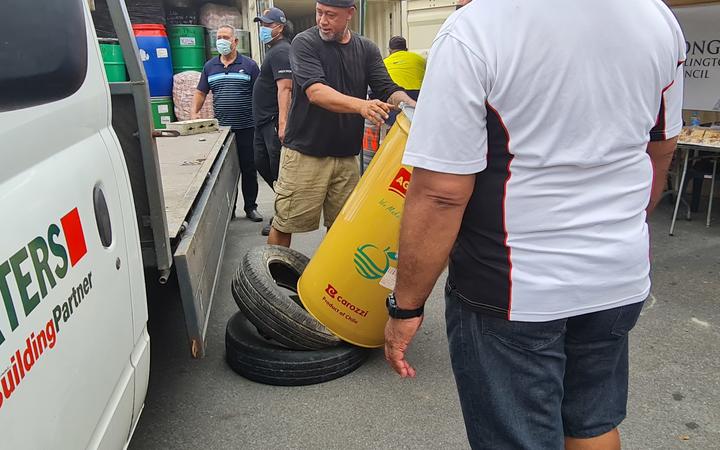 Each drum weighed over 100kgs as the men had no forklift to use – two tyres were were placed on the ground to take the impact of the drums when they were taken off a vehicle. Photo: RNZ Pacific

She said Tongan people draw strength from family members and their leaders:

“When the King and Prime Minister sent hopeful messages, very positive messages. We know that we will rise again, it’s a matter of faith, we have never loss our faith. With us Tongans, we might not have a lot of money but we invest in families and friends and in times like this, we come together to show each other how much we love each other and that we remain strong in our faith through prayer and support.”

She said most of the people she knows have heard from their families back home, which has been uplifting, and that despite the disaster a positive and hopeful attitude endures. 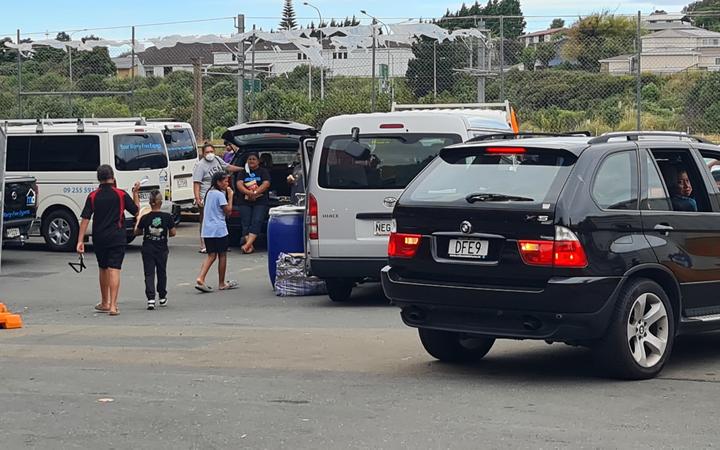 A local Tongan business owner has allowed the Council to use his premises as the collection place, and also said “We have so many people who have donated in different ways either by dropping off food for the volunteers, picking up barrels from families who are unable to bring them to this location.”

Once the containers are full, they will travel to Auckland and be shipped on the 15th or 16th of February, hopefully arriving in Tonga at the end of the month. The containers will arrive in Nuku’alofa, the capital, and supplies for Ha’apai, ‘Eua and other outer islands will be sent onwards.

Sokopeti Sina is the Assistant Secretary to Edna ‘Ungatea Havea.

She said it has been “a very emotional time for everyone, heart breaking and some of us have been recuperate energy knowing our family members are affected back home but at the same time we have to work to unify to be able to stand together so we can assist and do whatever we can to support our families back home.”

“There are Tongan words Loto’i Tonga, it is the heart of a Tongan it’s when something happens, we drop our differences and then we come together as unity and a family to work and give our time.” 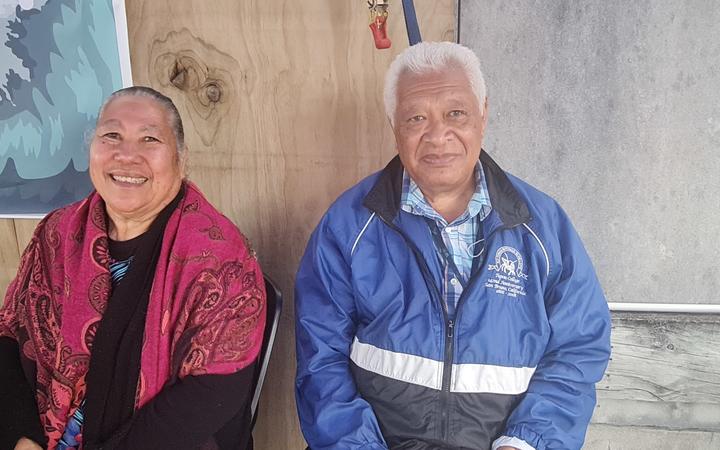 Reverend Simote Taunga and his wife ‘Akesa of the Methodist Church in Wellington Photo: RNZ Pacific

The supply barrels have been organised into a list, which will ensure that they are distributed to the right families in Tonga. As the list was checked so too were vaccine passes, to ensure everyone’s safety from Covid-19, when dropping off and loading.

She said the Tongan community is thankful to not only the New Zealand government but every person in Aotearoa who has sent lovely messages of support or has made a donation.

“I am very proud to be Tongan and contribute towards the organising of this relief drive,” said Ms Sina.

Since the collection started in Wellington Reverend Simote Taunga and his wife ‘Akesa have been providing spiritual support to the volunteers and the families who come along. A prayer is held before any work begins and a prayer is said at the end.

Reverend Taunga, of the Methodist church in Wellington, said the families he spoke to are very happy about being able to send supplies back to Tonga. Many families, who are facing economic hardships here in Aotearoa, had contributed supplies to this relief effort.

“I want to thank the Tongan families in Wellington for their effort and their willingness to send these items back home.”