The Ministry of Foreign Affairs and Trade has confirmed two deaths so far following the volcanic eruption and tsunami in Tonga on Saturday.. 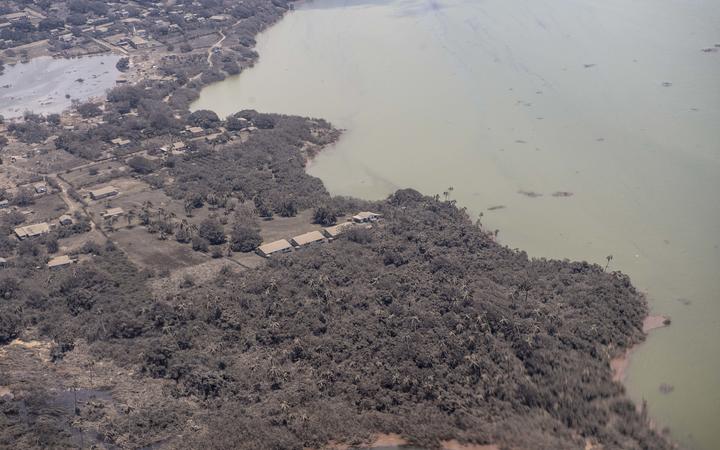 “Initial reports from inside Tonga, channeled via Dr Setoya, are that buildings and infrastructure have been damaged – around 100 houses have been damaged and 50 completely destroyed just on the main island of Tongatapu.

“Two deaths have been reported to date. Many remain displaced, with 89 people taking shelter in evacuation centres on the island of ‘Eua and many more seeking shelter with relatives. Around 2cm of ash and dust has fallen on Tongatapu, raising concerns of air pollution and the potential contamination of food and water supplies.

“Thankfully, all health facilities on Tongatapu are fully functioning and clean-up efforts have been initiated”.

A P-3K2 Orion aircraft flies over an area of Tonga that shows Ash on homes and surrounding vegetation. Photo: New Zealand Defence Force. Licenced under Creative Commons BY 4.0.

The Hunga Tonga-Hunga Haʻapai volcano, which erupted on Saturday, was about 65km north of Tonga’s capital Nuku’alofa.

There is now a huge clean-up operation in the town, which has been blanketed in thick volcanic dust.

Serious damage has been reported from the west coast of Tongatapu and a state of emergency has been declared.

The Ministry of Foreign Affairs and Trade has confirmed two deaths so far, but Fiji-based United Nations co-ordinator Jonathan Veitch said there were still areas that had not been contacted.

“There is a huge clean-up operation underway, the town has been blanketed in a thick blanket of volcanic dust, but look they’re making progress… roads are being cleared,” he said.

Veitch said one of those fatalities was British national Angela Glover, who was reported by her family to have been killed by the tsunami.

Glover is thought to have died trying to rescue her dogs at the animal charity she ran.

Veitch told RNZ full information from some islands – such as the Ha’apai group – was not available.

“We know that the Tonga Navy has gone there and we expect to hear back soon.”

The communication situation was “absolutely terrible”.

“I have worked in a lot of emergencies but this is one of the hardest in terms of communicating and trying to get information from there. With the severing of the cable that comes from Fiji they’re just cut off completely. We’re relying 100 percent on satellite phones.

“We’ve been discussing with New Zealand and Australia and UN colleagues … and we hope to have this [cable] back up and running relatively soon, but it’s been a bit of a struggle.”

It had been “a lot more difficult” than regular operations, Veitch said.

One of the biggest concerns in the crisis was clean water, he said.

“I think one of the first things that can be done is if those aircraft or those ships that both New Zealand and Australia have offered can provide bottled drinking water. That’s a very small, short-term solution.

“We need to ensure that the desalination plants are functioning well and properly … and we need to send a lot of testing kits and other material over there so people can treat their own water, because as you know, the vast majority of the population in Tonga is reliant on rainwater, and with the ash as it currently is, it has been a bit acidic, so we’re not sure of the quality of the water right now.”

“Tonga is one of the few lucky countries in the world that hasn’t had Covid … so we’ll have to operate rather remotely. So we’ll be supporting the government to do the implementation and then working very much through local organisations.”

For those in Tonga who were cut off, Veitch said the main message was “everybody is working day and night on this. We are putting our supplies together. We are ready to move. We have teams on the ground. We are coming up with cash and other supply solutions … so help is on its way”.

A map from the United Nations released online on 17 January illustrated the effects of the volcanic eruption in Nomuka island as detected from a satellite image.

It noted, however, this was a preliminary analysis and has not yet been validated in the field.

Tonga’s deputy head of mission in Australia, Curtis Tu’ihalangingie, said Tonga was concerned that aid deliveries could spread Covid-19 to the Covid-free nation.

“We don’t want to bring in another wave – a tsunami of Covid-19,” Tu’ihalangingie told Reuters by telephone, urging the public to wait for a disaster relief fund to donate.

Any aid sent to Tonga would need to be quarantined, and it was likely no foreign personnel would be allowed to disembark aircraft, he said.

Meanwhile, the United Nations say a distress signal has been detected in an isolated group of islands in the Tonga archipelago following Saturday’s volcanic eruption and tsunami, prompting particular concern for its inhabitants.

The UN Office for the Coordination of Humanitarian Affairs said there had been no contact from the Ha’apai group of islands and there was “particular concern” about two small low-lying islands – Fonoi and Mango, where an active distress beacon had been detected.

According to the Tonga government, 36 people live on Mango and 69 on Fonoi.

Australia’s Minister for the Pacific Zed Seselja said Tongan officials were planning to evacuate people from outer islands where “they’re doing it very tough, we understand, with many houses being destroyed in the tsunami”.