By RNZ/Radio New Zealand and is republished with permission.

New Zealand’s Covid-19 quarantine hotels are under increasing pressure with more than 200 infected with the virus and predictions the number could hit 1000. 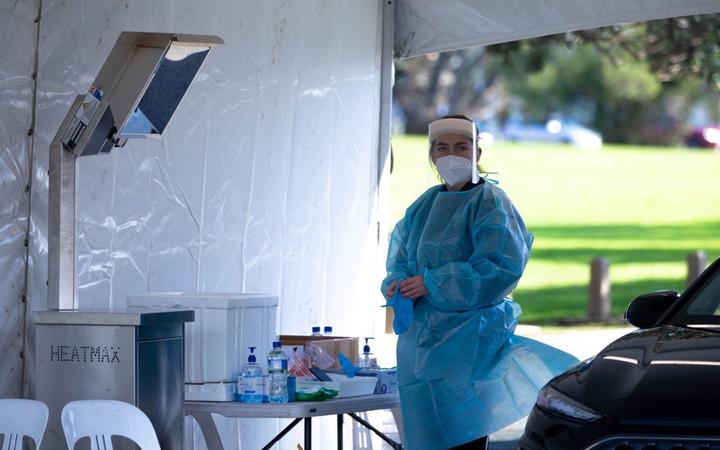 A health worker at the Devonport Covid-19 testing station, the Auckland suburb where the first community case was detected. Photo: RNZ / Marika Khabazi

The government has suggested if it runs out of spaces people may have to isolate at home.

Covid-19 Response Minister Chris Hipkins yesterday said they can cope with the number of Covid-19 cases New Zealand is seeing over the next week or so but if it continues beyond that decisions will need to be made.

He said that could include investigating whether people who are in New Zealand and get Covid-19 should isolate at home rather than in MIQ facilities.

The total number of cases in the community jumped by 62 yesterday to reach 210.

Professor Shaun Hendy, who is a Covid-19 modeller at the University of Auckland, said the current size of the outbreak far exceeded his initial calculations.

He said most of the cases being reported were still people who became infected prior to lockdown.

“This is telling us: we have got quite a large outbreak on our hands.”

Hendy’s initial modelling suggested up to 120 cases could have been circulating in the community before the level 4 restrictions kicked in.

He said he now thought that number could be as high as 300 given the number of young people infected and the “super-spreader” church service in Māngere.

“We’re really looking at an outbreak now that is similar to one that we dealt with in March and April last year … which was of the order of about 1000 cases.

“That’s kind of the scenario we’re looking at at the moment.”

Hendy said, as such, Aucklanders should prepare to remain under level 4 for a similar length of time as last year: at least a month.

“Aucklanders are used to it now. We do have to ride it out.”

The numbers would hopefully begin to stabilise this week and eventually fall away, Hendy said.

“From today on, we should start to see a larger proportion of cases coming from infections after the shift to level 4 and those numbers should be much fewer.”

However, Hendy noted that people were also likely to have passed the virus on to others in their household which could keep the numbers inflated for a while.

He said he remained confident that New Zealand could once again eliminate Covid-19.

“There is light at the end of the tunnel.”