BY RNZ.co.nz and is republished with permission

Conditions for quarantine-free travel between Australia and New Zealand have been met, and a bubble will start in less than two weeks, Prime Minister Jacinda Ardern says.

Cabinet met today to put a date on the long awaited trans-Tasman bubble, soon after New Zealand marked a year since the first national lockdown.

New Zealanders and Australians will be able to travel freely between their respective countries from 11.59pm on 18 April.

Announcing the start date this afternoon, Ardern – alongside Covid-19 Response Minister Chris Hipkins – said Cabinet had accepted the advice of the Director-General of Health and was “confident not only in the state of Australia but also in our own ability to manage a travel arrangement”.

She said Cabinet had been told the conditions to start quarantine free travel had been met.

“The Director-General of Health considers the risk of transmission of Covid-19 from Australia to New Zealand is low and that quarantine free travel is safe to commence,” she announced at Parliament.

“While Queensland has recently undergone an outbreak connected to the border, this too looks contained. And Cabinet believes any residual risk can be managed with additional precautionary processes such as pre-departure testing if needed.” 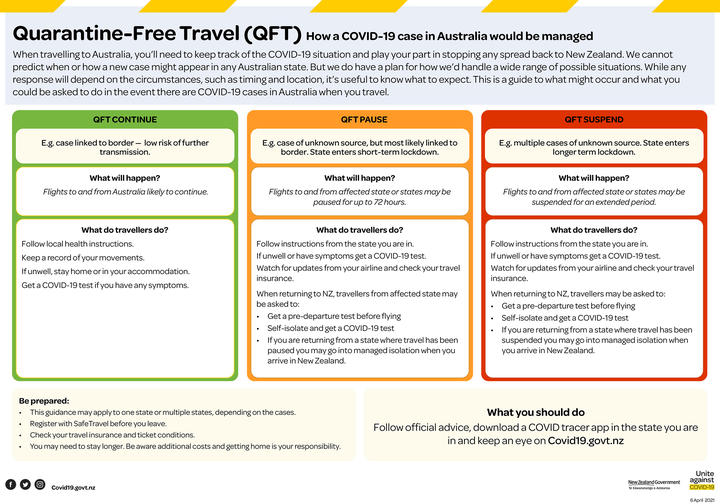 However, it will not mean hundreds of spare places in managed isolation will become available, with the government intending to keep 500 aside in case they are needed for the trans-Tasman bubble, and will decommission some smaller facilities.

New Zealand’s bubble will operate on a state-by-state basis with Australia, meaning if there’s an outbreak, New Zealanders in most other states will not be affected.

There will still be an element of ‘flyer beware’ for New Zealanders travelling to Australia, with the government saying it will not be coming to their rescue if they get trapped because of an outbreak.

There are also warnings there will still not be full insurance cover for Covid-19 related travel disruption, even within the bubble.

Ardern had previously said the government had carefully worked through the framework of a trans-Tasman bubble.

But she warned travelling would not be without risk and if there was a community outbreak in Australia, travelling Kiwis may have to stay put, self-isolate or be tested once they returned.

The three-day lockdown in the Greater Brisbane area was lifted over the weekend and there have been no new cases in Queensland for the second day in a row.

In northern New South Wales coronavirus restrictions eased on Monday night after another day of no new community cases.

New Zealand’s tourism industry has been waiting impatiently for quarantine-free visitor flights between the two nations to return, giving a much-needed injection of life into the sector, which could bring an estimated $1 billion into the national economy.

There will be a traffic-lights system for the bubble: continue, pause and suspend.

‘Pause’ would be a temporary halt to travel, much like the 72-hour suspensions from Australia in response to outbreaks here – namely the Valentine’s Day lockdown.

‘Suspend’ would be a longer term scenario where flights could be suspended for an “extended period” if there was a more serious or widespread outbreak, for example “multiple cases of unknown source… state enters lockdown”. 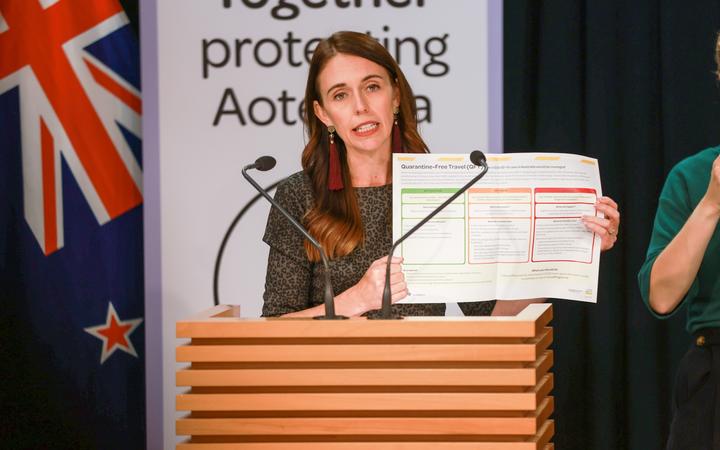 Apart from a handful of suspensions, New Zealanders have been free to travel to Australia without quarantining since last October, in what has effectively been a one-way bubble.

Hipkins said the framework announced today would help give Australia an idea of how New Zealand would make decisions.

Ardern said speed would be “of the essence in an outbreak”.

“There is no requirement for either side to give written formal notice before a decision is made because one of the important things we want to preserve on both sides is the ability to move quickly.

“We accept that … Australia may move quickly on a decision, and whilst actually for the most part they are very good at giving us a heads up that may not always happen, that means that they expect and understand if we do the same.”

The countries had committed to sharing information directly, she said.

“We’ll be on similar calls with one another where we’re discussing new information. We have the ability and power to make decisions in New Zealand’s best interests.”

While ministers did not make a final decision on this today, Ardern gave a strong signal the bubble would not result in large numbers of managed isolation and quarantine (MIQ) spots becoming available.

The main concern was the potential increase in people coming from high-risk countries still ravaged by Covid-19 and experiencing more infectious variants.

Ardern said the government intended to keep most of the space freed up as a contingency; ready to house people in the event of an outbreak where it was not possible to prevent them arriving – for example an outbreak identified in Australia when a flight was already on its way back to New Zealand.

Hipkins told reporters he had always maintained it would not be a “one for one” swap.

“The fact that there’ll be next to no people coming from Australia going into MIQ potentially frees up between 1000 to 1300 spaces on a fortnightly basis,” he said. 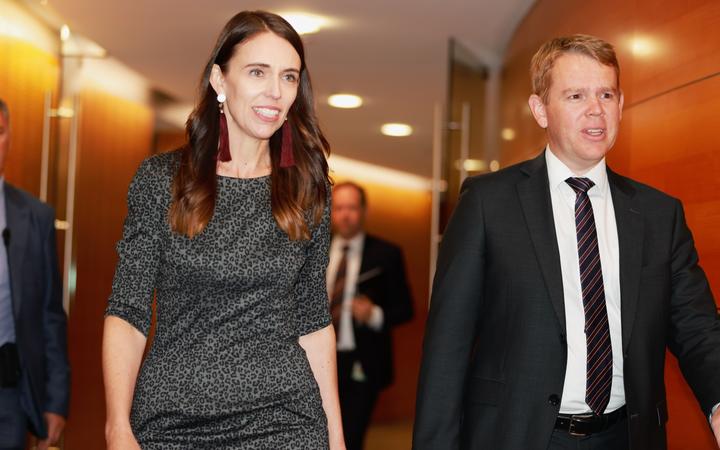 About 500 of those would be kept as “contingency spaces should they be needed for the trans-Tasman arrangement”.

There are a “small number of facilities” considered to have only been “suitable for travellers in quarantine from low-risk countries”.

“With the opening of travel, we will look to decommission these facilities – but in the meantime we are considering whether they could be used for other low risk countries, such as the Pacific Islands,” Hipkins said.

As a result, it was not expected “a large number of vacant quarantine spaces [would] come on stream … there will, however, still be thousands of spaces in MIQ for Kiwis”, he said.

There has been a huge amount of pressure on MIQs spaces; not only are there still large numbers of New Zealand wanting to return, but also constant calls for them to be used to fill labour shortages, and, for example, reunify migrant families of critical care workers.

Ardern said figures from 2019 showed about 40 percent of tourism arrivals were from Australia.

“They were putting back into our economy over $2 billion worth of spending … the estimates are by the beginning of 2022 we might get to 80 percent of where we were pre-Covid when it comes to Australian travellers.

“What I wouldn’t be surprised we see is that early travellers will likely be those who are travelling to see family and friends. We of course want to encourage people straight off the bat to come whenever they are ready because we are here and ready to welcome them.”

Asked why Australians should come to New Zealand, Ardern said: “We are safe and we cannot underestimate how important that is in this Covid-19 world. We are a safe place to bring your family to come and visit.”

National leader Judith Collins wanted a “reasonable” number of spots freed up for those families once the bubble is up and running – around 20 percent – saying they were “crucial” to New Zealand.

“There’s a lady I saw today whose whose husband is caught in Iran; she and her son are separated from her husband,” she told reporters.

“These are the sorts of things we’re talking about – real people, not just statistics, actually real people – and it’s their lives that are being put on hold.”

Requirements at the border

While arrivals from Australia will not have to isolate at a facility for two weeks, there will be stricter requirements when they land.

There will be pre-departure health assessments, obligations on air crew to remain completely separated from crew on any other routes.

“When those in Australia decide to come to New Zealand, they will be making a booking on a green-zone flight.

“That means that there will be no passengers on that flight who have come from anywhere but Australia in the last 14 days. They will also be flown by crew who have not flown on any high risk routes for a set period of time,” said Hipkins.

There will also have to be well functioning green zones in airports to make sure there is no cross contamination between different flights, and contact details for Australian arrivals while they are in New Zealand.

“Passengers will need to provide comprehensive information on how they can be contacted while in New Zealand, complete a pre-departure health declaration and won’t be able to travel if they have cold or flu symptoms,” Hipkins said.

“When they fly, they will be required to wear a mask on their flight, and will also be asked to download and use the NZ Covid Tracer app while in New Zealand”.

There will also be random temperature checks of airport arrivals.