The All Blacks have lost 24-22 to the Wallabies in their fourth and final clash of 2020, with the match defined by two red and two yellow cards. 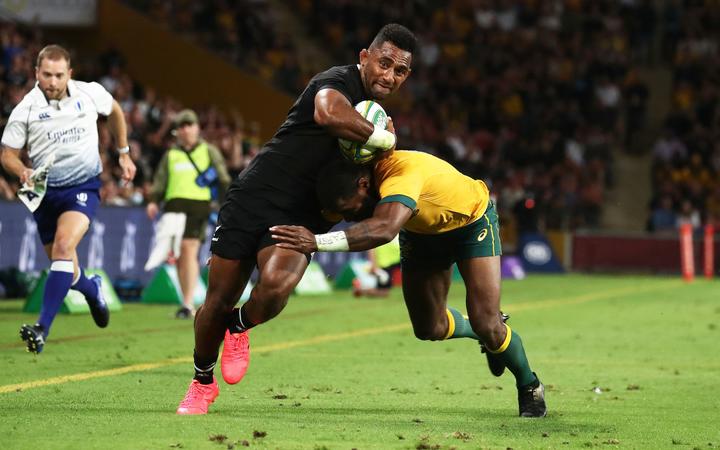 Despite outscoring the Wallabies three tries to two in the game at Suncorp Stadium in Brisbane, the All Blacks were caught short in the second half, spending very little time in the 22 and constantly under pressure, giving away costly penalties.

The Wallabies opened the scoring with a try to Tom Wright in the third minute of play, marking a dream start for the debut winger from the Brumbies, but New Zealand replied soon afterwards with a try to Rieko Ioane.

These would be the only tries scored in the first half, as the action in the first 40 minutes was overshadowed by two red cards.

New Zealand front rower Ofa Tu’ungafasi was sent off at the 20-minute mark – becoming the fifth All Black to ever be shown the red card in a Test – after his shoulder connected with Wright’s chin.

Fifteen minutes later, and with the scores locked at 8-8, the Wallabies were also down a man for the rest of the match, with Lachie Swinton sent off on debut for a similar high tackle.

See how the game unfolded with RNZ’s live blog

The Wallabies were then down to 13 men when Marika Koroibete was sent off with a yellow card for flying over the ruck in the final minute of the first half. Australia managed to hold off the All Blacks attack to go into halftime with the scores tied.

Despite being a man down, the Wallabies weathered the storm – including a try-saving tackle on Sevu Reece by Koroibete – and scored first in the second half with another penalty to Reece Hodge. The All Blacks then cracked their defence as Codie Taylor scored off a lineout drive, bringing the score to 15-11.

With a further Hodge penalty bringing the score to one point, Scott Barrett was shown a yellow card for a hand in the ruck and with 10 minutes to play, Australia regained the lead with another penalty and cemented the win with a Taniela Tupou try.

A last ditch effort from the All Blacks, including a late try to Tupou Vaa’i, was not enough to overcome the Wallabies, who came away with the win.