By Maja Burry, Rural reporter of RNZ. This story is republished with permission.

Supermarket shelves could soon run dry of watermelons with all import channels for the fruit currently closed due to biosecurity concerns. 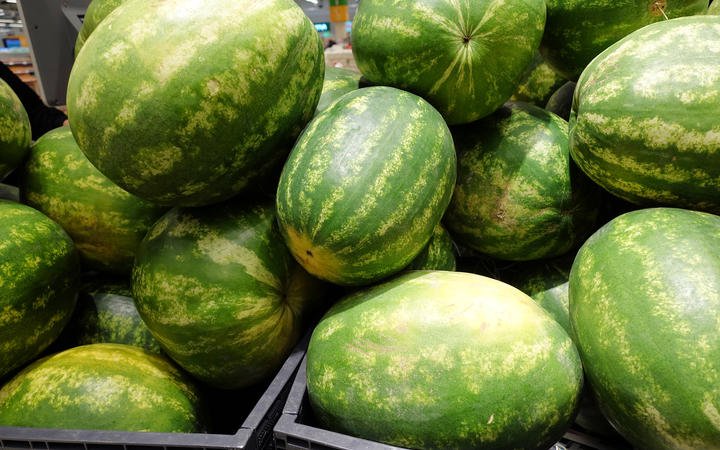 Imports of the fruit from Tonga were halted last week after live fruit fly larvae were detected at the New Zealand border on a consignment of watermelons from the country.

The Ministry for Primary Industries said there would now be an investigation into the non-compliance by the Ministry of Agriculture Food, Forestry and Fisheries in Tonga.

“Until the suspension is lifted, all consignments of watermelons from Tonga arriving at New Zealand’s border will be held with the option of destruction or re-shipment in accordance with the Import Health Standard,” MPI said in a statement.

MPI said there was no current pathway available for imported watermelons.

Watermelon imports from Queensland, another large supplier of the fruit, have yet to resume following the detection of cucumber green mottle mosaic virus (CGMMV) on an imported consignment last December.

Jerry Prendergast from United Fresh, which represents the New Zealand produce industry, said harvesting of New Zealand grown watermelons did not ramp up until January, meaning consumers could have to go without the fruit for some time.

“We had been expecting this year [that] Tongan watermelon would take us right through to Christmas and for example there was still about 75 to 80 twenty-foot containers [which] were due to come into the market between now and through to December, they won’t be able to come now.”

Prendergast said the suspension would be devastating for growers in Tonga, with the value of the outstanding imports expected to be worth about $1.6-2 million.

“So as I say we really feel for the communities in Tonga, I know that MPI was working very closely with the Tongan government to see what they can do to get that pathway up and open, but it’s very early days yet.”

Waikato watermelon grower Mike Parker said demand for watermelon was year round but did increase when the warmer weather arrived.

“On a hot day demand is usually very good for a nice juicy watermelon …. so January, February and often March those are the months where demand is highest, which also coincides with the bulk of the [domestic] growing season.”

Parker said it was extremely important that pests and diseases were kept out of New Zealand and said the halt on imports was necessary.

“We don’t want to jeopardise our industry at all, it’s bad enough with a pest incursion but with a virus, it can dilapidate a whole crop … so it’s extremely important that we have good biosecurity, so our hats off to MPI for stopping these imports.”

Parker said he had just begun planting the frost-tender crop on his property and would continue to do so over the coming weeks. He said growers would be hoping for nice warm weather and a bit of rainfall every now and again.

Food industry consultant Glenn Forsyth said New Zealanders shouldn’t cross their fingers for an abundance of watermelons this Christmas, because local growers would have only just started harvesitng at that point.

“They don’t really get underway until after Christmas so it will be tight and prices will be high, and of course the demand is going to be strong because everyone is hanging out for melons, so yes that’s a bit unfortunate.”

According to StatsNZ, for year the ended August 2020: