With one week of the election campaign still to run, Jacinda Ardern has spent the day rallying party faithful in deep Labour territory, encouraging supporters to lock in their vote early. 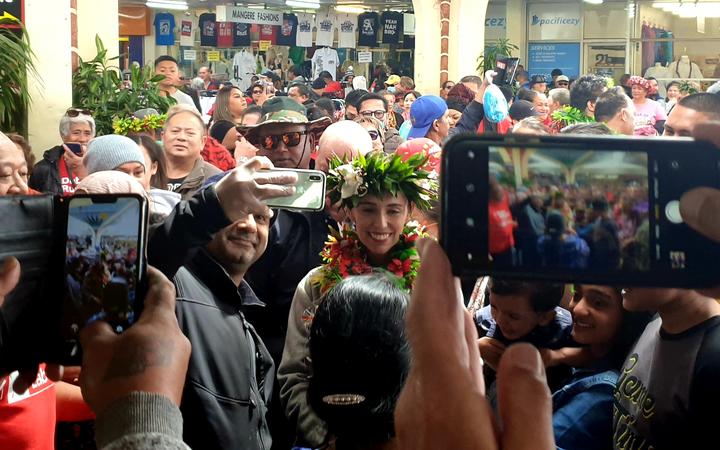 Jacinda Ardern was mobbed by admirers when she visited the Ōtara and Māngere markets this morning. Photo: RNZ / Craig McCulloch

Mobbed by a crush of admirers, the Labour leader slowly made her way around the Ōtara and Māngere markets this morning.

Behind her, an army of red t-shirts trailed; one volunteer bellowed through a megaphone, directing voters to polling booths nearby.

At the end of the Ōtara march, Ardern took the megaphone and jumped on stage, making a direct appeal to those gathered: “We’re asking you today to give your vote to Labour.”

“Today, there are more polls open than there were yesterday,” Ardern said.

Again, in the Māngere Town Centre, she concluded her speech to a packed crowd with an invocation: “Make sure you vote by the 17th of October.”

By the end of Thursday, more than 585,000 people had already cast a ballot, far higher than the numbers seen in previous years.

Speaking to media after, Ardern told reporters she was encouraged by the high turnout so far, describing it as a “sign of a healthy democracy”.

Asked whether Labour’s focus on advance voting was an attempt to secure the party’s current polling lead, Ardern said she simply wanted to ensure everybody had a chance to have their say.

“If you leave it to the last day, things happen – life happens. We want to make sure that people are voting early so that they don’t miss their opportunity,” she said.

“Traditionally, we have seen that those who are less likely to vote are actually those most affected by politics.”

The South Auckland markets have been closed for months due to city’s Covid-19 restrictions – and numerous political parties dropped in for their first day back in action.

National MP Kanwaljit Singh Bakshi and a small contingent of supporters circled the markets prior to Ardern’s arrival, as did Greens’ co-leader Marama Davidson with her grandchild in tow.