Auckland is to move to level 2, with eased restrictions on gatherings, at 11.59pm on Wednesday, Prime Minister Jacinda Ardern says.

The rest of the country will be in alert level 1 from midnight tonight.

Auckland’s level 2 status will means that gatherings of 100 will be permitted.

That level will be in place for 14 days, with Cabinet set to review those settings again on 5 October.

“If we remain on track it would then be our intention to consider moving alert levels from 7 October, again this is all conditional on us continuing as we are now,” Ardern said.

Ardern acknowledged deaths of two brothers of Covid-19. “These deaths are a reminder of just how serious this virus is.” 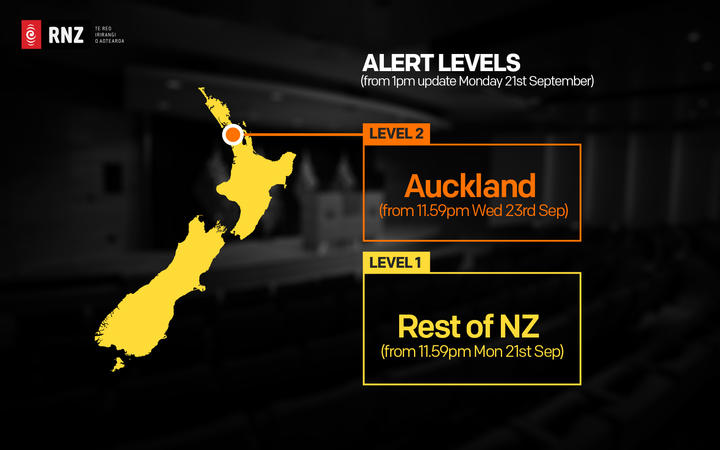 Analysis completed by the Ministry of Health suggests that by the end of this month there is still a 50-50 chance of New Zealand having eliminated Covid again, Ardern said.

“That’s cause for us not to get ahead of ourselves and to remain vigilant. For this reason, we need people in Auckland to continue to stay home when they are sick and get a test even if it is just a sniffle or a cough. Scan or keep a record of where you are and where you’ve been … continue to wear face coverings [on public transport].”

For all planes going through, to or from Auckland, face masks will be required since the city is still under level 2.

Regardless of the alert level though or destination, Ardern says it is still encouraged for passengers on planes to wear masks for safety.

No new cases of Covid-19 today

Director-General of Health Ashley Bloomfield said earlier there were no new cases of Covid-19 cases in New Zealand today.

Dr Bloomfield said the case over the weekend of the returnee who tested positive after being released from managed isolation should be commended for his actions for remaining alert to his health and self-isolating.

“This is exactly the sort of vigilance that will help us keep ahead of the virus.”

Two cases in the community were connected to the returnee, who was identified on Saturday. The person was diagnosed after completing the 14-day managed isolation.

Dr Bloomfield said the origin of the man’s infection was still being investigated.

The source of his infection is still under investigation and Dr Bloomfield says the ministry remains open-minded on the source, with the possibility that it could have been infection before departure in India, on the flight on the way to New Zealand, during his stay in managed isolation or on the charter flight after he left managed isolation.

CCTV footage of his movements is being reviewed, Dr Bloomfield says.

“Genomic sequencing has already linked this man’s version of the virus to that of two other cases from [the India flight], four cases have been ruled out as being linked, and two are still being sequenced.”

Three neighbours of the man – who were identified as closed contacts – have so far tested negative, he says.

There were 86 people on the charter flight the man took from Christchurch to Auckland – all were returnees who had completed their managed isolation period. They are being contacted and reassessed. Those who sat in the first nine rows, nearest to the man, have been asked to self-isolate, and testing for those people is underway.

There are 40 people now isolating in Auckland quarantine – 17 are cases of Covid-19 with the remainder being household contacts. There are three people in hospital with Covid-19 – one each in Middlemore, North Shore and Auckland.

Ardern says one of the major factors that will affect border control measures in place would be a vaccine.

“As a Cabinet, we approved a vaccine strategy and significant funding to support it in May.

“I can now report ministers have agreed to enter a legally-binding agreement for the auction to purchase approved Covid-19 vaccines for up to 50 percent of the New Zealand population, Tokelau, Cook Islands and Niue.”

This would take place through the global Covax facility, Ardern says.

“This is one of a number of key steps that will be taken to ensure New Zealanders have access to safe and secure Covid-19 vaccine when one becomes available.”

An initial $27m investment – from the Covid-19 response and recovery fund – would help accelerate the production of any vaccines on a global level, and give New Zealand the option to purchase from a diverse portfolio of vaccine candidates should any prove successful, Ardern says.

“By supporting the Covax facility, we also demonstrate our commitment to ensuring vulnerable communities everywhere including the Pacific receive the vaccines they need.”

More would be invested as the vaccine strategy is rolled out, she says.