Four more people have died from Covid-19 in New Zealand in the past 24 hours, the Health Ministry has confirmed.

Nine people have now died in the country from the coronavirus, with six of them being residents of the Rosewood Rest Home in Christchurch.

It is the highest number of Covid-19 deaths in a day in New Zealand.

Director-General of Health Dr Ashley Bloomfield said all four deaths were men, and three were linked to the Rosewood cluster. Two of them were aged in their 80s, and one was in his 90s.

The fourth death was a man in his 70s in Wellington, with that death linked to overseas travel. He was admitted to hospital on 22 March and had been “quite unwell for some time”.

“It is a sobering reminder of what is at stake here,” Dr Bloomfield said.

He offered condolences on behalf of New Zealand.

“Whether husbands, partners, fathers, grandfathers, brothers, uncles, cousins or friends, wherever they fit in their wider whānau, we are thinking of them and of you.” 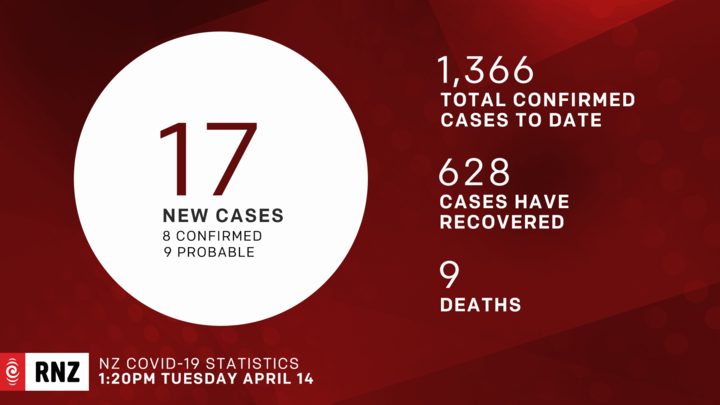 “We have had cases to date in six facilities around the country, this is from a total of about 650 facilities nationwide.”

He said the fact that relatively few facilities had reported infections was the result of hard work on behalf of the rest and care homes, alongside the Ministry of Health.

Every new arrival in a facility must now go into isolation for 14 days, and meals will be taken separately.

There was also a low threshold for testing, Dr Bloomfield said.

He said there would be an announcement later in the week about funding for aged care facilities.

“I have also decided to commission a review of the aged residential care facilities where we have had cases … we think it’s a very good point in time to undertake a review,” Dr Bloomfield said.

He said the review of aged care facilities was “good practice”.

Dr Bloomfield said as someone who had lost both his parents, he absolutely understood how people who couldn’t be with loved ones when they died would be feeling. That was why the rules around visiting relatives in hospital were being reviewed.

Dr Bloomfield also confirmed that there have been a total of 17 new Covid-19 cases in the past 24 hours – eight confirmed and nine probable.

The total number of cases is now 1366. There are 15 people in hospital, with three in ICU, and one is in a critical condition.

Dr Bloomfield said 1572 tests were processed yesterday. About 64,400 tests have been taken in total.

The total number of people who have recovered from the coronavirus is 628, an increase of 82 since yesterday.

He said it was clear that New Zealand was past the peak under this alert level.

“We will be more confident once we know more about each of those new cases that has been occurring in the past week.”

He said he sent a message to DHBs today to have a low threshold for testing people with respiratory symptoms over the coming week.

Dr Bloomfield said at the moment, he would rather be overtesting for the virus than undertesting.

He also said by Monday – when a decision will be made about whether the country comes out of alert level 4, or not- the Health Ministry would make sure it could provide robust information to the government.

He said of the total cases, health authorities had the capacity to trace about 100 new cases per day.

So far, the contact tracing team had followed up with thousands of people.