There have been five new cases of Covid-19 reported in New Zealand in the past 24 hours, with one more death linked to the Rosewood Rest Home cluster.

One of the new cases is linked to overseas travel, three are to existing clusters, and one is still under investigation, but may be linked to travel.

The latest death was a man in his 60s, who is the tenth person from the Rosewood cluster to die.

“This man had underlying health conditions and was considered to be a probable case of Covid-19, based on his exposure history and clinical symptoms.

McElnay said this again illustrated the impact the coronavirus can have on vulnerable people.

“Every person we lose to Covid-19 is a tragedy, with family and friends left without their loved ones, and our thoughts are with them all at this time.”

She said 1095 people had now recovered from the virus, an increase of 30 from yesterday.

Eight people are in hospital, one is in ICU in Middlemore Hospital.

Speaking at the briefing, Finance Minister Grant Robertson added his condolences to the family and friends of the latest victim.

“Each death from Covid-19 is a person who was loved, and whose family is dealing with grief and death in the most trying of circumstances, and our heartfelt thoughts are with them.”

He said ongoing vigilance for the remainder of level 4 and for level 3 was critical for finishing the job.

Robertson said the economic plan to respond and recover from Covid-19 consisted of three waves:

Robertson said applications for the Jobseeker benefit had risen by 30,000 since 20 March and he said it was a distressing time for all of those people. 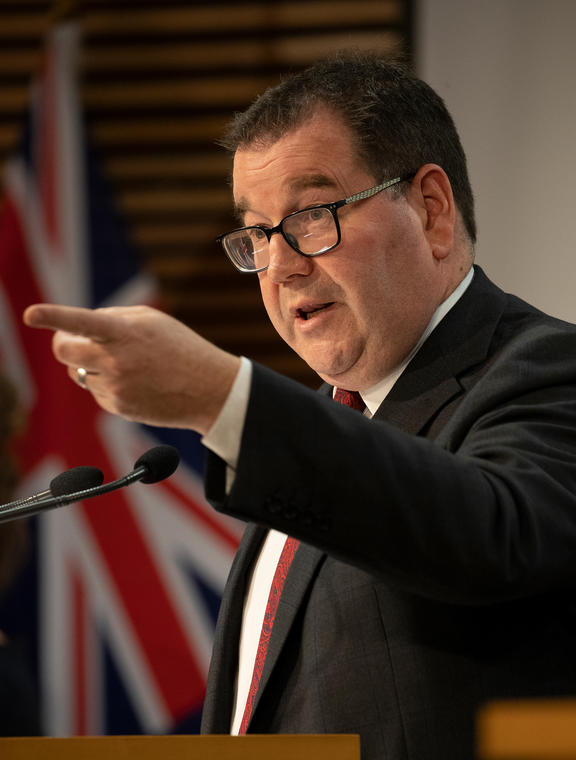 “We have to bear in mind, though, that this represents less than 1 percent of the total population and is dwarfed by the 1.6 million people that are being supported by the Wage Subsidy Scheme.

“These immediate measures mean we are all in a better position to bounce back on the other side of this crisis.”

He also thanked a number of businesses for their assistance to the government.

“This has been a true New Zealand effort in fighting a once-in-a-century social and economic crisis.

“We will continue to draw ideas from people from all walks of life.”

He said this year’s Budget would devote resources to positioning for recovery and kick-starting the economy.

Robertson said the wage subsidy scheme had paid out $10.3 billion.

“The vast majority of NZ business owners would access the scheme as we intended it, to protect jobs, support workers’ wages and stay connected during the lockdown.”

He said 99 percent of them were doing right by their workers.

Assurance and audit processes put in place by MSD to make sure the wage subsidy scheme was not being abused is being overseen by a team of 104 fraud experts and investigators, Robertson said.

Robertson said MSD had completed 2435 random and targeted audits – 2252 have been resolved and an additional review of 183 cases are being undertaken.

Speaking as sports minister, he said details would be available on the Sport NZ website today on what sports could take place under alert level 3, although the site crashed soon after he announced this.

He listed golf, tennis and non-motorised water sports close to shore as some examples.

“The core principals of staying in your bubble, staying local and only undertaking low-risk activities remain.”