By GEORGE MARTIN FOR MAILONLINE

Indonesia’s disaster agency has said the death toll from an earthquake and tsunami that devastated part of the island of Sulawesi has climbed to 832.

The tsunami, which was triggered after a magnitude-7.5 earthquake, ripped through the Pacific Ring of Fire and crashed into the Palu at 500mph, causing widespread destruction into the evening on Friday.

Sutopo Purwo Nugroho, the spokesman of the national disaster mitigation agency, told a news conference on Sunday that 821 of those killed were in the city of Palu. He said another 11 people were killed in the town of Donggala.

Scroll down for video 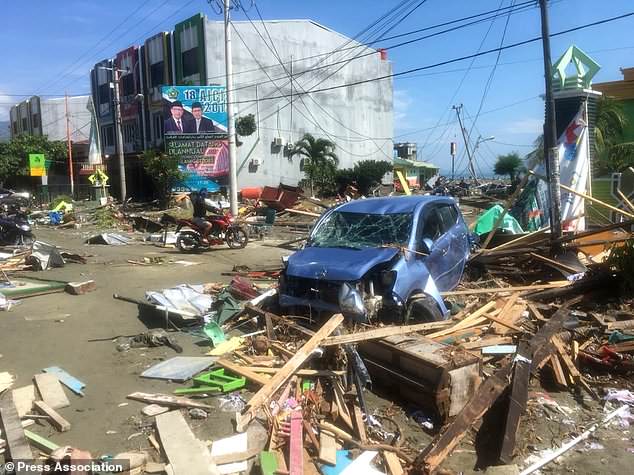 He said access to Donggala, as well as the towns of Sigi and Boutong, is still limited and there are no comprehensive reports from those areas.

He said: ‘The death is believed to be still increasing since many bodies were still under the wreckage while many have not able to be reached.’

Fears are mounting for the the fishing town of Donggala, which was closer to the epicentre of the quake, but which rescuers have not been able to reach. The town of Mamuju was also severely affected but currently impossible to access due to damaged roads and disrupted telecommunications.

Meanwhile criticisms have been levelled at the country’s geophysics agency for lifting the tsunami warning 34 minutes after it was first issued, which may have led to confusion and exacerbated the death toll. 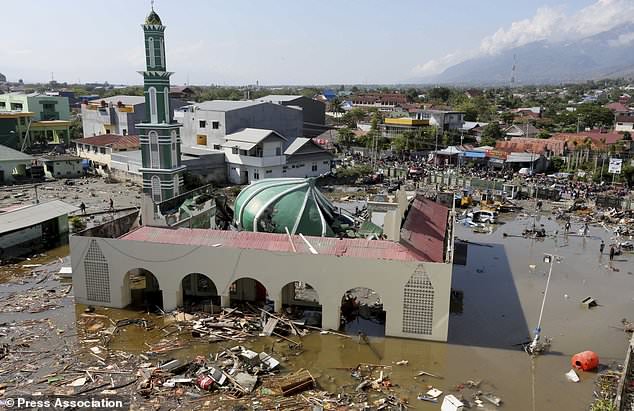 Many of those killed in Palu were swept away by giant waves more than 10ft high as they played on the beach in the scenic tourist town.

The number of casualties was no doubt increased by the fact that hundreds of people had descended on Palu’s beach for a festival to celebrate the city’s anniversary, due to start Friday night.